Just as we can factor

It follows that each of the four numbers

Thus our algebraic interpretation of the five vertices of the regular pentagon
as the five fifth roots of unity has destroyed the five-fold symmetry. We have
distinguished one vertex, placing it at the point 1=1+0i. So we now have to
look for a different kind of symmetry, that among the four remaining vertices,
or better the four remaining roots.

There is a one obvious symmetry, that which interchanges

. This is an algebraic as well as an geometric symmetry
because it is just a matter of replacing each of the numbers by its complex
conjugate

In other words the operation of complex conjugation that interchanges

is like reflection in a mirror. All arithmetic properties are faithfully preserved. 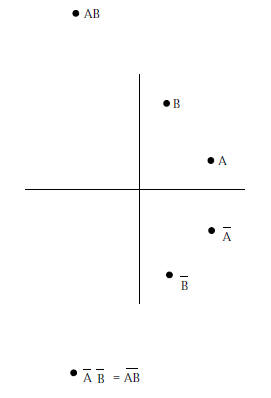 
It is sometimes useful to recall that the relation

is the same as

Why is, for example,

One shows in the same way that, for example,

. Observe
also that, along the same lines,

This is because the angle

and the cosine
and sine do not change when 2π is added to or subtracted from an
angle. Indeed, in some respects, the angle itself does not change!
(Note: this statement is correct, but calls for some reflection!)

But −i is also just a symbol and can be taken as the primary symbol. Then
i is a second symbol that functions as −(−i). Even if i is taken to have some
meaning beyond that of a mere symbol, it cannot have a different meaning
than −i, so that the two have to be regarded as perfectly interchangeable.

Are there other symmetries of this kind?

. Before we do, we make use of the
symmetry at hand. Since

where a, b, c and d are arbitrary ordinary fractions form a collection closed
under addition, subtraction, multiplication, and even as it turns out division.
The numbers that are equal to their own reflections can be singled out. These
are the numbers

Let w be the number

. It is equal to its own reflection. So is its
square. Thus

We calculate this equation

Since w is a positive number,

In other words, w can as we know be constructed with ruler and compass.
Since

lies above the axis of abscissas,

, we can easily find

, its complex conjugate, and we can certainly
find

. We can also find

rather than w. This is,
however, straightforward algebra. As Descartes insisted, the algebra often turns a problem
into an almost unthinking manipulation of symbols, a turn that it can indeed often take,
but we prefer another direction. This is the direction taken by Gauss.

can also be expressed as

Are these numbers all different?

This is an important question! The answer is yes and I shall give a proof following
Gauss. We first note the consequences. Since the numbers are all different, we cannot have
an equation

and essentially only this equation, because if we have any other such as

then by the process of long division we will have