A visual method for adding fractions is introduced. The similarities between this and another method are studied. A formal definition is introduced in an intuitive and visual way. The multiplication is discussed as well as analogies between addition and multiplication with union and intersection of two sets. A final discussion on the philosophy of the method and a comparison with another method for adding fractions is presented here.

The teaching of addition of fractions at an elementary school level has long a well known teaching challenge (Lappan-Bouck [4] and Lamon [3]). It is widely recognized that there are at least two major bottlenecks in the mathematics education of grades K-8: the teaching of fractions and the introduction of algebra.” ([5, Page 1]) There are several methods to approach the problem (Lamon [3]). Even though some have proved to be successful, there is still the need of minimizing the difficulty of the understanding of this addition process. This paper is intended to approach and present the problem in a uniquely different way.

The method proposed here focuses on a visual method that was discovered when trying to introduce fractions for the first time to a child in the second grade.

In Sections 2 and 3, I discuss the meaning of a fraction, its notation and the importance of understanding its value. In Section 4, pictures allow us to visualize the addition of fractions which is done in section 5. A comparison with other similar method of adding fractions is discussed in section 6, and finally the multiplication of fractions is discussed in section 7. The last sections are dedicated to the discussion on the importance of giving a concise answer when teaching of adding fractions. Analogies and the abstract meaning of the fractions are presented here.

2 What is one fourth?

What is one fourth? What is the actual value of one fourth? These are some of the typical questions a child might ask when he or she is exposed to the concept of a fraction for the first time. The most formal answers (which are believed to be the simplest) to these questions are presented in this section. The child is expected to have a concept of multiplication previous to any presentation of fractions.

Among the numbers we knew so far (the integers), none of them satisfies the four of this make one property. We can try with number 2 for example, but it will impossible that 2+2+2+2 be equal to 1.

figure II.
Figure II The five of this make one property in symbols and its simplified version

3 What is the true value of one fourth?

Figure III
One Unit, one cake

One fourth is not the small portion of the cake that looks like figure IV, since four of these pieces make just an amount like in the one shown in figure V, this amount has not the same size of our birthday cake.

Figure IV
A fake representation of one fourth

One fourth of our birthday cake looks like in figure VI.

Figure VI
A valid representation of one fourth

Indeed four of these pieces make an amount equal to the one of our birthday cake, as it can appreciated in figure VII.

Let's now fix or establish a size, a measurement, and clarify what our unit is; it will be a square, a particular square of any fixed size. The size is not really important as long as we agree that from now on, that will be the unit and it will not be changed. Three fifths will mean three single one fifth-pieces. Three fifths looks like shading one fifth and another one fifth and another one fifth together, like in the figure VIII.

Figure VIII
A colored representation of 3/5, the whole square represents our unit 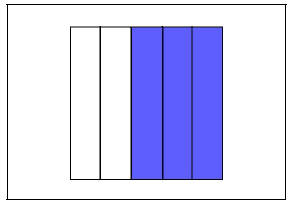 In figure VIII, just the shaded area is the one that represents three fifths and the whole piece represents one unit (one unit of cake for example). From now on, we will color transparent pieces of paper to represent fractions.

Figure IX
We wish to add the quantities shown 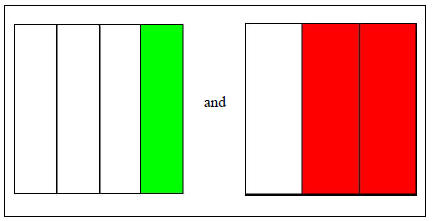 We now put them together by superimposing both squares and rotate one of them ninety degrees. What we obtain is a grid of twelve little rectangles. The big square represents one unit, one unit of cake. The cake has been divided equally in twelve little parts. Some of them are red, other green and the other ones have a mixture of red and green (yellow) as in the figure X.

Figure X
The colored area represents the sum of 1/4 and 2/3. The yellow being a
combination of both, counts double 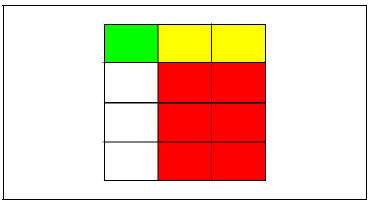 There is another way of approaching the same problem; in fact this is the justification on why the previous method works. If we just look at the superimposed squares and concentrate on the area that is or was green, then this area can be estimated as three out of twelve little rectangles, whereas the area that is or was red can be estimated as eight out of the twelve rectangles, as in the figure XI. Therefore the sum 1/4 + 2/3 can be seen as, 3/12+8/12, which is, 11/12.

H. Wu ([6, Page 55-56]) describes a geometrical representation of 2/3 that is similar to the one presented here. When trying to add 2/3 and 1/2, Wu combines the shaded areas in a horizontal way, and he divides each piece into six equal parts creating a grid with each piece. By aligning them horizontally, he uses these small rectangles as "yardsticks” to measure the combined area and then he proceeds to count. In figure XII, the sum of, the sum of 2/3 and 1/2 is illustrated via Wu's method ([6]) by aligning and dividing each square.

Figure XII
Wu’s representation and addition of 2/3 and 1/2.

The method described by Wu is similar in the sense that a grid is created. It is different in the sense that he has to align the pieces, create the grid and do an analysis from there whereas in the method presented in this paper, there is a superimposition and the counting is direct.

Figure XIII
We wish to multiply the quantities shown.

As before, we put them together by superimposing both squares and rotate one of them ninety degrees. What we obtain is a grid as in the figure XIV. 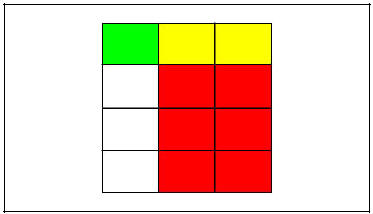 ETA Cuisenaire Company ([1]) has produced the set Picture Grids (Fraction & Decimals), Set of 60 ETA 020272.” This is a set of 60 translucent squared cards and each one of them has a fraction of it shaded with a given translucent color. Each card represents a fraction just as the representation described in this paper. The set of cards create the grid described here by superimposing them. The package comes with a written description on how to use the set, examples, pictures and problems. The written description provides a full explanation on how to compute the product of two fractions using the cards. However, the written description does not approach the addition of fractions at all.

8 Analogy between union and addition, intersection and multiplication

Wu ([6, Page 5]) defines a fraction as a division point on the real line. This is merely a geometrical description, a graphical definition. Lamon ([3]) writes: “As one moves from whole number into fraction, the variety and complexity of the situation that give meaning to the symbols increases dramatically. Understanding of rational numbers involves the coordination of many different but interconnected ideas and interpretations. There are many different meanings that end up looking alike when they are written in fraction symbol...” I think that intending to explain the meaning of a fraction as a result of combining old concepts such as the integers is a big mistake. People look and look for an interpretation of fractions in real life via numbers that they understand. A story that appeared at a newsletter for teachers at University of Rhode Island ([2]) tells that on the first day of the teaching career, an anonymous teacher defined a rational number to an eighth grade class as a number that can be expressed as a ration of integers. A student asked the teacher: What exactly are rations? How do rations differ from fractions? The teacher was not satisfied with the answers given to the student and the teacher consulted with some other teachers and texts. The result was confusion.

Wu ([6, Page 5]) mentions “...fractions tend to be discussed at the source, in the sense that attention is invariably focused on the interpretation of fractions in a real world setting. Since fractions are used in many contexts in many ways, students are led through myriad interpretations of a fraction from the beginning in order to get some idea of what a fraction is. At the end, a fraction is never defined and so the complexities tend to confuse rather than clarify...” Certainly the interpretations and the contexts on which fractions are involved are endless, however explaining a new concept in terms of the existing one is impossible. No combination or algebraic combination of integers will ever produce 1.

When we only know the natural numbers or the integers, the fractions are new numbers and we need to accept them as they are, new entities. They are defined in terms of their properties and therefore these properties make them unique. It is important to be able to recognize that the successful answers are the ones that are short, realistic, and formal. The best job that a teacher can do is trying to explain the formal definition in an intuitive and logical way to the children. That is why when a child asks me, what is one fourth? I answer; it is a new number that satisfies the property: four of this makes one.

Finally, the goal of applying the visual method described in this paper is not to gain expertise in all types of problems of addition of fractions (such as adding three fractions, subtracting fractions, etc.) but to gain intuition, clarity and formality about the concept of fractions and the sum of two of them.