How to Graphically Interpret the Complex Roots of a Quadratic Equation

As a secondary math teacher I have taught my students to find the roots of a
quadratic equation in several ways. One of these ways is to graphically look at the
quadratic and see were it crosses the x-axis. For example, the equation of y = x2 – x – 2,
as shown in Figure 1, has roots at x = -1 and x = 2. These are the two places in which the
sketched graph crosses the x-axis. 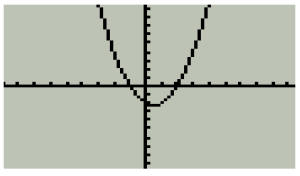 We can think of the first term (½) as a starting place for finding the two roots.
Then we see that the roots are located 3/2 from the starting point in both directions.

This leads us to roots of a quadratic equation that does not cross the x-axis. These
roots are known as complex (imaginary) roots. An example of a quadratic drawn on a
coordinate plane with complex roots is shown in Figure 3. Notice that the vertex lies
above the x-axis, and the end behavior on both sides of the graph is approaching positive
infinity. The complex roots to can be found by using the quadratic formula, but it is
beneficial to students to visualize a graphical connection.

GRAPHICAL INTERPRETATION OF COMPLEX ROOTS
We know that any quadratic can be represented by y = ax2 + bx + c. We also
know the roots of quadratic equations can be derived from the well-known quadratic
formula:

If the roots are real we visually interpret them to cross the x-axis as shown in Figure 4a.

But, we are interested in graphically interpreting the roots of a graph that does not cross
the x-axis, as in Figure 4b.

To see how this is configured analytically, we will start with the general equation
of a quadratic. (Remember: The quadratic that we are starting with (bold line) is known
to have real roots.) First we complete the square. Then to create the flipped quadratic
(which is a different equation), a negative is applied to a. Then I simplified the equation
by multiplying.

WE ARE CREATING A NEW QUADRATIC AT THIS POINT. 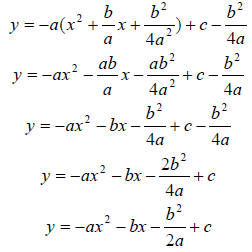 Now to be able to compare these complex roots to the real roots that we started
with, plug the coefficients of the equation above into the quadratic formula. 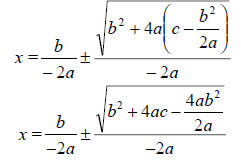 Because we are adding and subtracting from

it is unnecessary to write the
negative in the second denominator.

Since we know that we the roots are complex, we can show that by extracting a
negative out of the radical.

Complex Roots of the Flipped Quadratic

Real Roots of the Quadratic We Started With

Notice that the real roots and the complex roots of different quadratic equations
yielded very similar answers. They are actually the same except for the i in the complex
roots. 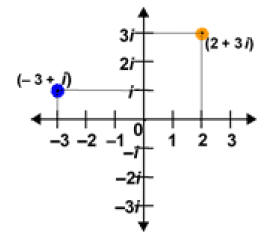 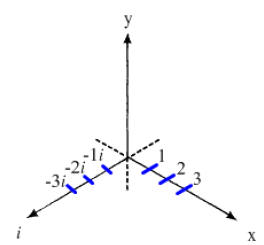 If we now use the (x,y) coordinate plane to draw a quadratic with complex roots
we could get something that looks like Figure 7. Notice the quadratic does not cross the
x-axis. 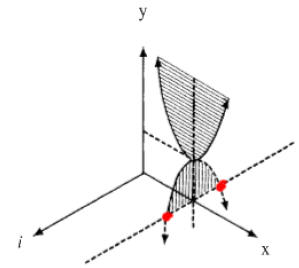 Notice that the two points indicated can be found by starting at x units in
the real direction and i units in both the positive and negative direction. We are
then able to graphically see the complex roots of a quadratic equation. 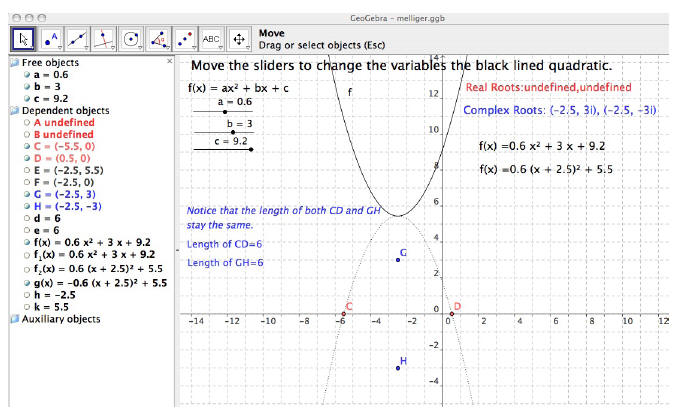