This means that, from an abstract point of view,

is simply a number
that satisfies the equation

and no other. But

have exactly the same property. Thus for
strictly algebraic purposes we could take

. Since all algebraic relations are to be preserved, this entails
replacing

. Once again,
because all algebraic relations are to be respected, the number

is to be replaced by

In general a number

which is a number of the same kind. For example

The symmetry just examined can be viewed in two ways:

1) It takes the sequence

of all roots of

2) It takes any number

of the same kind.

This is the kind of symmetry that was later investigated in general by
Galois. We have to spend some time growing accustomed to it. Suppose we
apply the symmetry twice. Then

So the symmetry when repeated four times comes back where it began. It is
a four-fold symmetry.

Anticipating Galois and his successors

No matter which of the numbers

to be, the
collection of numbers

is the same. Modern mathematicians usually call the collection a field. the
sum and the product of two numbers of this sort are again numbers of the
same sort. This we have seen already. I give another example.

Any symmetry of this collection that respect the algebraic operations will
take 0 to 0 and 1 to 1. Then adding and dividing it takes any fraction a/b to
a/b. Moreover any root of

will be taken to another root. Thus

will be taken to

.
In other words, the symmetry will be one of the four (including the trivial
symmetry!) we already have. Denote the one taking

we obtain the symmetry taking

. Repeating
again, we find that

is the trivial symmetry.

, thus by complex conjugation. They are the numbers
a+ bw, w =

. We were able to construct

by succesive square roots, by
first singling out this special collection of numbers, finding that any number
in it satisfied a quadratic equation with fractions as coefficients, in particular
that w2+w−1 = 0, so that

.
We now apply these ideas, which I hope are clear, to the heptadecagon! 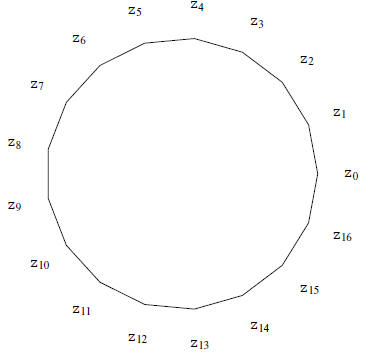 From the Disquisitiones Arithmeticae

There is a famous remark from the introduction to the seventh
and last chapter of the Disquisitiones that I quote here. What it
anticipates is the study of the division points on elliptic curves, in
the remark a special elliptic curve, a study that led over the course
of the nineteenth and twentieth century to many things, especially
complex multiplication and l-adic representations, that are relevant
to the Shimura-Taniyama-Weil conjecture,

A proof by Gauss (beginning)

Recall that we want to show that

is a root of the equation

but of no equation of the forms

in which a, b c and d are fractions.

The impossibility of the last equation is clear because

is not a fraction.
If it were a root of the first, then using long division to divide (I) by

is also a root of

satisfies an equation of type (II). If it satisfies (II), then perform a long
division to obtain

We now show that the factorizations of (IV) and (V) are impossible. We
first observe a very important fact.

An equation of degree n

cannot have more than n roots!

Suppose (VI) has a root e. Using long division, divide by Z − e. The
result is

so that if (VI) had more than n roots, then (VII) would have more than n−1.
All we have to do now is continue, working our way down to lower and lower
degree until we arrive at an equation of degree one

that clearly has only one root.