Powers of Ten and Calculations

Power of ten is the mathematical shorthand for writing very large or very small numbers, using positive
or negative exponents of base 10. The exponent is written as a superscript numeral to the right of the 10.

(5) When multiplying two numbers expressed as powers of ten, add the exponents. For example,

(6) When dividing two numbers expressed as powers of ten, subtract the exponents. For example,

(7) When multiplying or dividing numbers in scientific notation, multiply (or divide) the scalar
values separately from the exponents, then combine the two.
For example,

(8) When adding or subtracting numbers expressed in powers of ten, transform the values to a
common exponent, then add or subtract the scalar (non-exponent) values. For example, 3.8 x 103

To make thinking in large and small numbers a little easier, scientists and engineers commonly
express powers of ten in multiples of 3 (or –3), which is equivalent to counting, 1 thousand, 1 million, 1
billion, 1 trillion, and so on. In computer lingo, this idea is expressed by the prefixes kilo-, mega-, giga-,
and tera-, as in “megabytes.”

Other things to keep in mind about math with exponents:

Use a leading zero in the ones place for any decimal values
for example, 0.025 instead of .025

The exception to the above guideline is when you need to use a common exponent for
operations such as addition and subtraction;
for example,

Be careful about moving the decimal point and the exponent in the correct direction
(especially for negative exponents). In your mind (or on paper), convert the number
expressed in scientific notation into a decimal value, and ask yourself whether the
exponent gets larger or smaller. (Admittedly, this can be tricky.)

A rule of thumb for decimal places and exponents:
For positive exponents, 1 x 10n n is equal to the number of zeroes to the right of 1.
Examples:

For negative exponents, 1 x 10-n there are (n-1) zeroes to the left of 1
(i.e., the equivalent decimal position would be to the right of the 1)
Examples:

Remember the relationship between positive and negative exponents and reciprocals of
fractions:

AND, when adding or subtracting with scientific notation, always remember to convert to
a common exponent:

Express each number as a power of ten:

(can zero be represented as a power of ten?)
Express each as a non-“power of ten” number:

Complete each calculation, show intermediate steps when appropriate, and express the
answer as a power of ten: 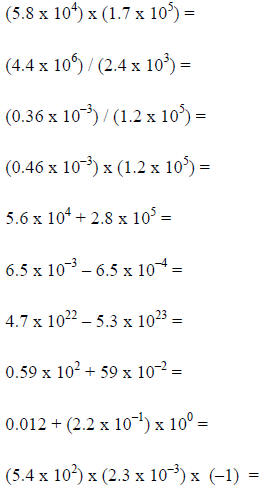